Arm amputation on a coating drum

A 36 year old employee lost his right arm at the shearing point between the drum´s lower edge and the reversing shovel (see red circle) when taking an unauthorized sample from a running coating machine. This machine consisted of several coating drums in series with one drum coating an individual basic product. In the next stage, the content of one drum is transported in reversing mode into the next drum. 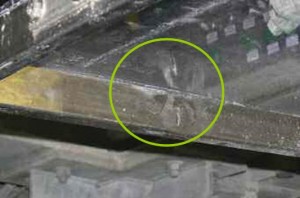 The machine´s protective equipment was defeated in such a way that it could run despite an open guard. To achieve this, the mounting of the interlocking switch (green circle)for the big front screen had been cut off. 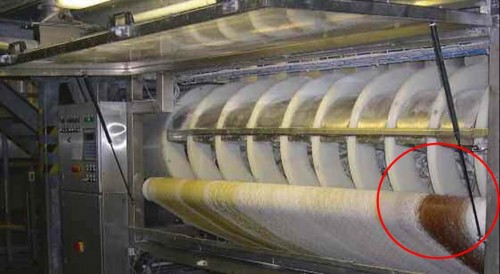 Due to persisting problems regarding coating quality and the necessity to constantly adapt the operating parameters to the critical product, frequent intervention is necessary.

… to be eliminated in the run-up

If consideration of critical products and possible fault sources had been taken into account already at the machine´s design stage, both an optimized sampling procedure and reduction of necessary intervention would have been possible. Here, it becomes obvious that it is possible to reduce potential hazards if user and manufacturer co-operate in the run-up.

The bakery employee wanted to clear a fault in a dough dividing machine. For this purpose, she entered the narrow area (about 50 cm wide) behind the machine to open the lateral covering (gate). Whilst the employee, in bent position, was working within the machine, a colleague actuated the ON-switch on the machine´s front side. Obviously, he had noticed neither the malfunction nor his colleague behind the machine. The woman was hit by machine parts and suffered an upper arm fracture.

The position switch of the guard was no longer fitted. This was the reason why the machine could start with the guard (lateral gate) being open. Furthermore, the employees were not trained in fault finding/clearance and guard checking.

Fatal accident on a cup filling and closing machine

During the night shift, a malfunction occurred on the gripper head of the cup filler; due to this malfunction, the filled flan cups were not set straight into the cardboard trays. The machine operator informed a fitter from the fitter´s shop. The fitter opened a lateral protective cover of the machine in order to find the cause of the malfunction. He bridged the position switch of the protective cover with a counter-piece. Having restarted the machine, he performed adjustment and lubrication works. The machine now ran trouble-free. The fitter went back to the shop; however, he left his tool trolley at the machine as he expected another malfunction. The protective cover remained open with the position switch being bridged.

Shortly after, the fitter and a master fitter returned to the machine. They observed the machine together. When they thought having found the cause of the malfunction, the fitter fetched the tools required for the repair from his tool trolley. Returning, he found the master fitter bent into the machine; the protective cover was open. The master fitter´s head had got stuck in the machine, and was crushed by the gripper head against the frame of the machine casing. It was not possible to clarify whether the machine was running (cyclic operation) or inadvertently switched on at the operating panel on the opposite side while the master fitter was bending into the danger area. After this accident, six employees who had been present at the time of the accident suffered a post-traumatic stress disorder.

In order to allow fault clearance with the machine running, the position switch had been bridged; thus, access to the hazard point was possible.

Where work has to be done with the guards open, e.g. for fault finding and clearance, it is necessary to take appropriate measures such as inching mode with acknowledgment switch.

The employee entered the danger area of the palletizing system and suffered a fatal injury of his head due to being hit by the film bag applicator. The drives were not stopped when the employee entered the area. It is assumed that he then unintendedly interrupted a functional light barrier, thus initiating a machine movement. The film bag applicator pulls a film over bagged goods stacked on a pallet. This machine, together with other machines, is enclosed by a protective fence. Access to the machine is provided by an interlocked guard gate. Inlet and outlet are safeguarded by safety light barriers.

From time to time it is necessary to enter the danger area of the facility, e.g. in order to provide new film material.

Pneumatic clamping grippers hold the film gathered by the film applicator and pull it from above over the bags. When a person enters the facility through the interlocked guard gate intended for this purpose or when the safety light barriers at the inlet and outlet are interrupted, all drives are stopped and the pneumatic system is discharged. This also causes the pneumatic clamping grippers to open. However, this renders an extensive fault clearance necessary, with the gathered film having to be cut off by hand and inserted by new. Presumably, the employees working on this facility wanted to save themselves this extensive fault clearance required after safety light barrier interruption. Shifting the light barriers upwards allowed access to the danger area without discharging the pneumatic system.

… is easy to eliminate

This act of defeat could have been avoided: from the safety point of view, it is no problem at all to keep the clamping grippers holding the gathered film in closed position when the safety light barriers are interrupted. Unfortunately, the machine was not modified accordingly until the accident had occurred.